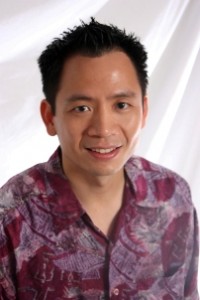 Beyond Black and White
By The Rev. Dr. Jonipher Kwong
One of the earliest casualties of 2010 (January 3 to be exact) was a woman by the name of Mary Daly.  Daring to challenge the institution of patriarchy within the Catholic Church, she wrote a book called Beyond God the Father in 1973, which has since revolutionized and scandalized the religious world.  Even though many UUs today will see her work as ‘tame’ or even ‘irrelevant,’ since many of us have moved beyond seeing God as male and even beyond theism, period, Mary Daly was truly ahead of her time by having the audacity to dismantle this deeply-held, dualistic notion of male versus female.
Today, we are far from getting rid of the last vestiges of sexism.  We can’t even remove heterosexism from our vocabulary, as evidenced by Prop. 8 in California and other anti-equality legislation.  And even though we elected the first African American to the presidency, we certainly can’t say, “We’ve arrived” when it comes to addressing the problem of racism.  We are still holding on to the sin or error of dualism, which threatens to keep us apart and blind us to our interrelatedness.
I would like to propose two things to help us move beyond a black and white world.  The first is to recognize the fact that we come in many shades of color.  In fact, I dare say that we are a rainbow-colored group and not just shades of gray.  This was evident for me living in Hawai‘i (appropriately dubbed the ‘Rainbow State’), where race issues clearly are not just black and white.  Currently, various Asian ethnic groups have a slight ‘majority’ in the state, but it’s one of the few states where the white population is actually ‘growing’ because of migration from the mainland.  Indeed, the human race may manifest itself in many different colors, but our skin tones fail to capture our true essence as a species.
The second is to move beyond race distinctions altogether and this is where I have the brightest hope for young people.  I know this is a generic (as well as generational) statement, but when we choose to go on a date, do we date that person because of their skin color or because we like them and feel a certain ‘chemistry?’  In Hawai‘i, over 50% of marriages and family configurations are multi-racial and multi-ethnic.  Our president is a product of that diverse environment.  Those of us who ‘get it’ are perfect ambassadors to those who still come from a black-or-white framework.  We need to move beyond racial differentiations and see the possibilities that are out there.  Perhaps that’s one of the message the movie Avatar teaches us.  The divine is present even in blue creatures from outer space.  We need to get over ourselves if we truly are to survive as a species and see beyond black and white.
The bottom line is exemplified by our seventh principle: Respect for the interdependent web of all existence of which we are a part.  Let us honor Mary Daly’s legacy by moving beyond black and white, and let us break free from the ties of dualism that bind us.
The Rev. Dr. Jonipher Kwong is an Interfaith Organizer for California Faith for Equality.  He also sits on the Board of the California Council of Churches and the Steering Committee of the Unitarian Universalist Legislative Ministry of California Marriage Equality Leadership Team.  Ordained with the Metropolitan Community Churches, he served as the Founding Minister of ‘Ohana MCC in Honolulu and Resurrection Beach MCC in Costa Mesa, California.  He is currently in the process of seeking plural standing with the Unitarian Universalist Association.
Prior to moving back to the mainland, Jonipher was the Executive Director of the Counseling & Spiritual Care Center of Hawai‘i.  Raised in an ecumenical background, Jonipher values his pluralistic upbringing – from Evangelical to United Methodist, Episcopalian to Calvary Chapel.  He was christened at a Gospel church and baptized as a Chinese Mennonite.  In Hawai‘i, Jonipher was a member of the Honolulu Mindfulness Community, a sangha influenced by Zen Buddhist monk Thich Nhat Hahn.
Jonipher obtained his Master of Divinity and Doctor of Ministry degrees from Claremont School of Theology.  He graduated with a Bachelor of Arts Degree in Film Studies from the University of California at Santa Barbara.  Prior to getting “the call,” Jonipher worked in the film industry for three years, followed by two years as a Graphics Specialist at McKinsey & Company in Los Angeles.