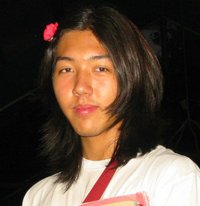 Elias Waddington has been an active Unitarian Universalist for just over a year and has been a member of the Countryside Unitarian Universalist Church for just over half a year. He discovered the UU community at Camp De Benneville Pines where he realized that he has been raised with UU ideas. His American father has been a UU since High School.
Elias has been playing piano since he was five and at Camp De Benneville Pines, he discovered a new way to express his spirituality through music. He draws inspiration and influence from widely varying genres including cool jazz, classical, and power metal.
In his church, Elias is an active member in the youth discussion group, the Senior High youth group, and youth and adult committees. He has also been elected to the Central Midwestern District’s Youth Steering Committee as the communications director, writing articles for the CMwD newsletter, the Midwesterner. Elias’s main contribution to Unitarian Universalist gatherings is his music. Playing both piano and percussion, Elias uses his music to enhance worship services that promote relaxation and self expression. Beyond music, his hobbies range from miniatures to computer and information technology. He is currently planning to pursue a career in aerospace and systems engineering.