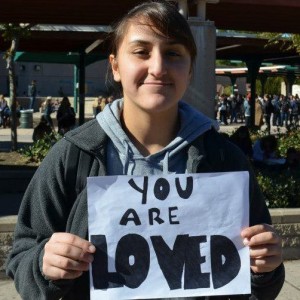 This was originally published in the April 2013 issue of MavLife News, the school newspaper for La Costa Canyon High School.

Everyone knows what it means to “come out of the closet.”  But nobody ever asks how people get into the closet in the first place, and what’s it like in there, anyway?

People locked me in the closet from the moment I was born.  Along with all the other gender stereotypes, they presumed that one day I’d like boys, marry a man and be heterosexual, just like my parents. I was never asked, “Well, Laila, do you identify as heterosexual, or homosexual?” no one ever consulted me on that one.  Everyone always assumed (and they still do) that I identified as heterosexual and they put me in a category and that category became a closet. Once I realized that I wasn’t heterosexual the walls of the closet started suffocating me.

I admitted to myself that I was gay around seventh or eighth grade.  I went through a lot of denial before I had the guts to write down on paper that I was gay. That was on paper. I still struggle simply saying the words out loud.

I was in middle school between 2008 and 2010; at that time studies showed that nine out of ten gay students experienced bullying or harassment in school.  Stories in the news and at home popped up about gay people getting bullied, beaten up, losing the support of their family and friends, losing their jobs, even committing suicide.  When I came out to my younger sister, she began to cry.  She said she was scared that I would get beaten up at school.

Each day I heard “That’s so gay,” or “don’t be such a fag” many times. I remember that a few of my close friends sometimes expressed disgust or disapproval of being gay.  Homosexuality was paired with nothing but negativity and shame.  That kind of social pressure pushed in the walls of my closet and instilled deep fear in me.  I was so afraid of anyone finding out that I was gay that I disguised parts of my personality. I lied to most of my close friends about who I had a crush on.  I avoided any clothing that insinuated masculinity.  At times I even tried to make my voice sound a little higher so that I could appear more feminine.  In acting class I was cast as a leading male character and almost turned it down because I was so worried what people might think.  I silenced myself and I silenced who I really was, all out of fear.

This fear continued into high school.  Even after coming out to my immediate family and close friends, I never talked about my sexual identity in public. I had to filter everything I said. The simplest everyday conversations brought up internal struggles.  Imagine having people constantly ask you what boy you want to ask to formal.  Then you have this sinking feeling in your stomach because you can either tell the truth (“Actually, I’m gay and really want to ask this girl I met at a party”) and risk your entire friendship, or you can lie (“I don’t really have anyone in mind, so I’m just going stag”) and stay safe. You must deny that this part of you even exists. At all costs you must keep silent.

That’s the silence that the Day of Silence aims to end.  When I see some of my peers wearing red or supporting the Day of Silence, I immediately trust them. I know that they will accept me when they find out I’m gay; they will stand by me as allies without judgment.  All of a sudden, the walls of my closet stop closing in and start easing up. I can feel a little safer prying open that closet door.

To end the silence faced by teens like me everywhere, I’ve written this piece. I can count the openly gay students at this school on my fingers; it’s not right that so many of our peers are silent. If you are closeted and need help, I support you.  Our Gay Straight Alliance meets every Tuesday and every member of that club supports you.  A vast majority of our staff and administration support you.  Stand up to the silence in your own life.

I’ll leave you with this: writing this piece was not easy. I procrastinated for weeks, not because I didn’t want to write it, but because I had to build up the confidence to do so. I’m not sure how this will be received. I expect that some of my peers will stop talking to me, and I’m worried that some may even bully me.  But I think more friends will be moved into action.

Think about the voices you are not hearing today.  What will you do to end the silence?